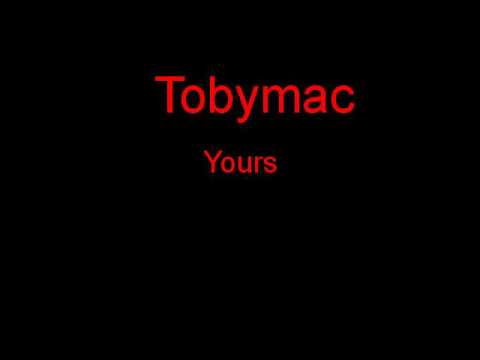 Lyrics:
Every time I turn my back I get the feeling that
I’m ’bout to take a shot to the skully with a bat
I’m out of control, need you to fill my soul up
And could you shed a little light on the skeletons
holed up
My past is taking me to task
And I can’t guarantee how much longer I’ll last
Without You I’m a hopeless wreck
So I cry out Your name as I drop to the deck

Simple minded little punk
Thought I was the junk
Nobody ever told me that my doo-doo stunk
What was I out of my mind
Or was I just trippin’ on an ego
But You filled up the space and You never let me
go
Bullseye to the center of my soul
One shot but it rocked like a fatal blow
This love was Your gun, mercy Your shells
Now I’m a dead man walkin’ down a skinny trail

Toby McKeehan (born Kevin Michael McKeehan;
October 22, 1964), better known by his stage name
TobyMac (styled tobyMac), is a Christian recording
artist, music producer, hip-hop/pop artist,
singer-songwriter, and author. TobyMac was one of
the first and best-known Christian rappers. He was
first known for being a member of the Christian
vocal trio DC Talk, staying with them from 1987
until their announced hiatus in 2000. He has since
continued a successful solo career with the
release of five studio albums: Momentum (2001),
Welcome to Diverse City (2004), Portable Sounds
(2007), Tonight (2010), Eye on It (2012), as well
as two remixed albums of the first two albums
titled Re:Mix Momentum and Renovating Diverse City
respectively, and one remix album for albums
number three and four titled Dubbed and Freq’d: A
Remix Project (2012). He also has a full-length
Christmas album Christmas in Diverse City (2011).
TobyMac became only the third Christian artist to
have a No. 1 debut on Billboard’s Top 200
chart with Eye on It. Between DC talk and his own
solo career, he has sold more than 10 million
albums. TobyMac has had six No. 1 hit CHR
including “Gone”, “Made to Love” and “Lose My
Soul.” Five singles have gone to number one on
Billboard’s Christian Songs chart, tying him with
Third Day for fourth on the list of artists with
the most number one hits on that chart. His live
concert CD+DVD combo album, Alive and Transported,
was released in 2008 and received the Grammy Award
for Best Rock or Rap Gospel Album at the 51st
Grammy Awards in 2009. His fifth studio album, Eye
on It, was released on August 28, 2012.

Thankful For You – tobyMac – Lyrics